The sporran is the leather bag or purse that male Scots hang over the front of their kilts as part of the traditional highland wear outfit. The sporran was originally developed because the kilt had no pockets and the Scots, like everyone else, needed somewhere to put stuff.

Worn by clansmen including the sometime outlaw and hero Rob Roy MacGregor, the early sporran was a capacious pouch made of deer or calf skin drawn close to the waist by a thick belt that could take some weight. This is the style of the sporran at the bottom of this page.

A highlander on the march would take his gunshot and also his day's food (dry oatmeal, which he would mix with water at mealtime)  in his sporran. It is said that Montrose's men several times marched sixty miles in one day on this oatmeal ration, and were fit for  battle at the end of the trip. We do not have reports of modern-day Celts who have done this, but perhaps the matter of oatmeal for energy should be looked into.

Following the bloody defeat of Charles Edward Stewart at Culloden in 1746, the wearing of all highland dress was banned until 1782, although it could be worn locally by members of the armed forces.

After that dark period, there was an increase in interest in wearing of the tartan, from both a political and romantic point of view, reaching a height of enthusiasm under Queen Victoria, who was greatly in favor of all things highland. This led to the modern style of sporran which, admittedly, is not quite as functional as its historical predecessors, as it doesn't hold as much. This does not greatly bother modern Celts, who do at least keep their money in it, as we can attest from selling items to them at many highland games.

We currently offer only the historical style of sporran.

Our stock of sporrans and belts are offered at a good price, as they were bought when the British pound was a lot lower against the dollar than it is now. We plan to discontinue these when current stocks run out.

If you are putting together a historical highland outfit, you would find the sporran below to be suitable. Or, if you simply want to wear a sporran that is useful, and not dressy, this one would work well.

The back and top flap are made of one piece of heavy cowhide folded over; the front of these sporrans is a piece of flexible leather that is closed or opened by a drawstring. The drawstring is held closed by a black-colored ball, an ingenious device hidden under the flap in the picture. The ball has a locked spring button that loosens its grip on the drawstring when you press the button, and you can then move the ball along the string.
A leather string closes the flap by looping over a cowhide button in front.
There is the standard holder for belt or chain on the back of these, a bow to  modern times.
The flexible leather front opens outward, and the manufacturer guarantees that you can get a lot of stuff into these sporrans! 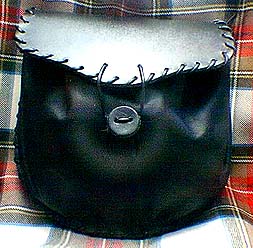 SP1. Laced Rob Roy sporran, probably our most authentic style. Made in Scotland by Thistle. This sporran has leather lacing all around the flap, and also around the rest of the sporran, attaching the soft front leather to the stiff back cowhide piece. (They did not have sewing machines in Rob Roy's day.) 7 1/2" high x 7 1/2" wide. $115 Note: we have just one of these left. 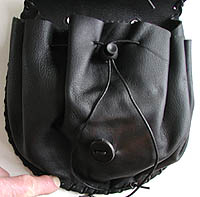 At left we show this sporran with the front flap lifted to show the  button that allows for adjusting the folds of leather.

This is attached on the top back of this sporran; the clips from the belt pieces attach to the rings at each end.

The SB 1 and 2 attach to a small piece of leather on the back that has a ring on each end, as shown below. 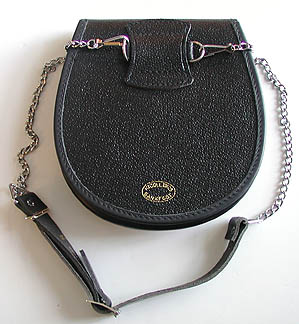 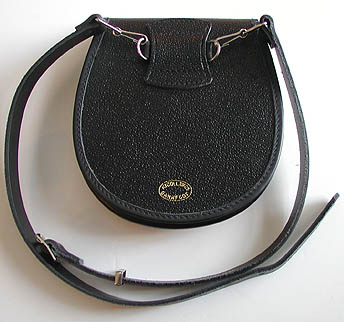 The Harp and Dragon business is for sale.

We invite inquiries about buying up our inventory.
Please click here to inquire.

We will remain in business for the foreseeable future until we announce otherwise.

You are on the Sporrans page of the web site www.harpanddragon.com
There are over a hundred pages on this web site; click on the Home Page link
at left to see an outline of this entire site.

If you do not receive a reply from us within a day or so after sending in an order, or after emailing a question, please contact us again, as our reply may have been thrown in your spam bin or may have returned to us. Exceptions: weekends or when we note on our front page that we are closed for any reason.